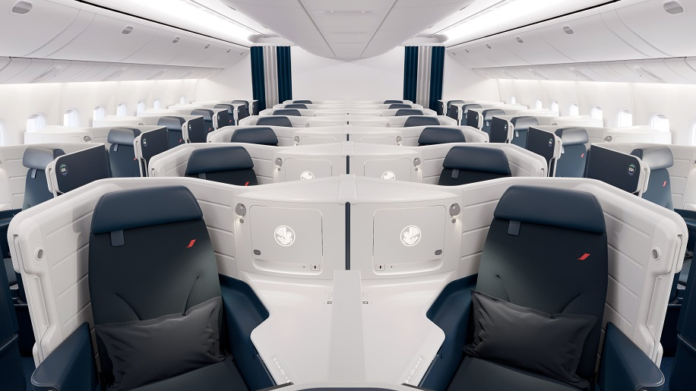 Air France has unveiled a new long-haul business class seat, which will be fitted to selected B777-300 aircraft later this year.

The airline says that the seat is based on “the 3 Fs” – Full Flat, Full Access and Full Privacy. In practice this means it converts into a fully flat bed “almost two metres long”, and is configured in a 1-2-1 reverse herringbone layout with direct aisle access for all passengers, with a total of 48 seats in the cabin.

Privacy has been achieved by the addition of a sliding door “to create a totally private space, out of sight from the other passengers in the cabin”, and there is a privacy panel which can be lowered or raised between the seats in the centre of the aircraft, “creating a convivial space in which to make the most of the flight together” (or not).

An increasing number of carriers are adopting sliding doors in business class, with examples including British Airways’ Club Suite and Etihad’s new A350-1000 suites.

Other features include a 17.3-inch 4K HD anti-glare screen with Bluetooth connection for passengers wishing to use their own headsets, as well as “several electric sockets”. Design elements include brushed aluminium and full-grain French leather, and the company’s historic winged seahorse emblem – which is increasingly being used across Air France materials from amenity kits to airport lounges – can be seen on the storage space at each seat.

An evolution of Air France’s current B777-300ER business class, the seat is markedly different to the carrier’s A350-900 business class (reviewed in 2019), which features a staggered 1-2-1 layout.

The new seat will be progressively rolled out across 12 of the carrier’s B777-300 aircraft from September, with New York JFK set to be the first destination to feature the new product from this autumn.

In addition Air France is installing its latest premium economy seat (already available on its A350 aircraft) on the B777-300s, with a total of 48 seats offering 96cm of legroom, a 124-degree recline, USB A and C charging ports, and an integrated noise reducing headset. The carrier also said that the seat had been “widened to provide greater privacy”, although no further details were given on this.

The aircrafts’ economy cabins are also set to be refitted, with 273 seats offering “a wide 43 cm seat pan, a 119 degree recline and 79 cm of legroom”, as well as USB A ports and 13.3-inch 4K HD screen with Bluetooth connection (the same as offered in premium economy).

All of the cabins will feature the carrier’s signature colours – navy blue, “white for light and contrast”, and hints of red.

Meanwhile Air France has provided an update on what it calls “a more responsible catering offer”, which by the end of 2022 will see all flights departing Paris offering “meat, dairy products and eggs of French origin, fish from sustainable fisheries, the systematic choice of a vegetarian dish and meals that are fully prepared in France”.

The carrier is also progressively introducing the option for business class passengers to pre-select their hot dish prior to departure, combining “the guarantee of customer choice” with reduced food waste.

And Air France is developing “eco-designed in-flight items that are manufactured from bio-based materials such as bagasse and cellulose”, with the aim of eliminating 90 percent of single-use plastic items on board its aircraft by the start of 2023.