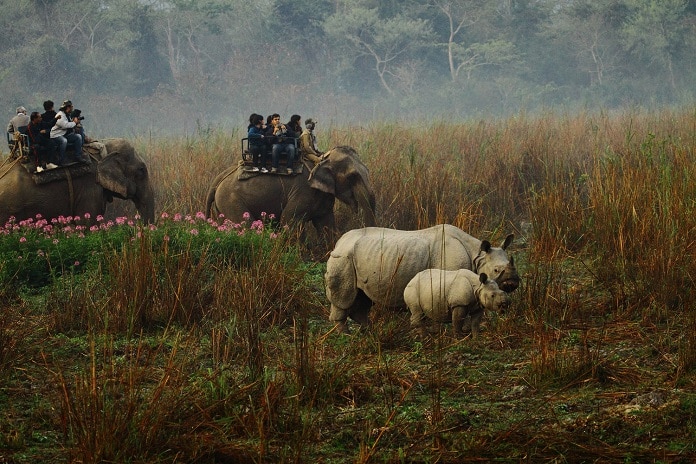 The Kaziranga National Park (KNP), famed for one-horned rhinoceros, was opened to tourists on 21st October, after being closed for seven months due to COVID-19 pandemic.

The Kaziranga National Park (KNP), famed for one-horned rhinoceros, was opened to tourists on Wednesday, after being closed for seven months due to COVID-19 pandemic.

The almost seven-month-long closure since March because of coronavirus lockdown and then the monsoon has been the longest in its 112-year history. However, only jeep safaris are allowed as of now and a limited number of jeep safaris will be allowed at a time. The elephant safaris and other activities will start from 1 November.

Assam Chief Minister Sarbananda Sonowal formally reopened the KNP and expressed hope that this will revive the state’s tourism sector which has been severely hit by the pandemic.The KNP remains shut for around five months every year since April-end during the monsoon season when floods also occur in the state. The Park was closed in March this year after the government imposed lockdown.

Sonowal said that unemployed youths in and around Kaziranga would find meaningful employment again through jeep safari and other tourism-related activities.

He said that the state government had provided a one- time financial assistance to people engaged in the jeep safari to alleviate their economic stress brought by COVID-19.

The state government would take more such initiatives in future for providing succour to the people engaged in the tourism sector of the state, the chief minister said. He asked the people of the five districts covered by the KNP and the local communities residing in the surrounding areas of the park to extend full hospitality to the visitors coming from outside.

Sonowal also urged tourists to maintain all COVID-19 protocols while visiting the KNP and other places so that the spread of the pandemic can be contained.The chief minister said that the state government was able to stop rhino poaching to a great extent in the last four and half years and thanked the people of the nearby areas for extending their full cooperation in this regard.

According to the park authorities, wearing masks, using hand sanitisers and maintaining social distance will be a must for all visitors. All tourists and guides would be subjected to thermal scanning, and health checks. Only the symptomatic would be allowed in. The safari jeeps and all other vehicles will also be sanitised after each trip.

For now, jeep safaris are only allowed to Kaziranga Range (Kohora) and Western Range (Bagori) because of inclement weather and road conditions, an official notice said.

“From 1 November, elephant safari will be started. Five new destinations have been opened for tourists with a mix of jeep safari, river tourism and trekking,” park director P Shivkumar said.

All of Assam’s five national parks and 18 wildlife sanctuaries were closed in March in view of the coronavirus outbreak. They remained closed in July because of the monsoon like they always do. However, unprecedented floods in the Brahmaputra basin submerged almost the entire Kaziranga Park, killing 100 animals, including the endangered one-horned rhinos.