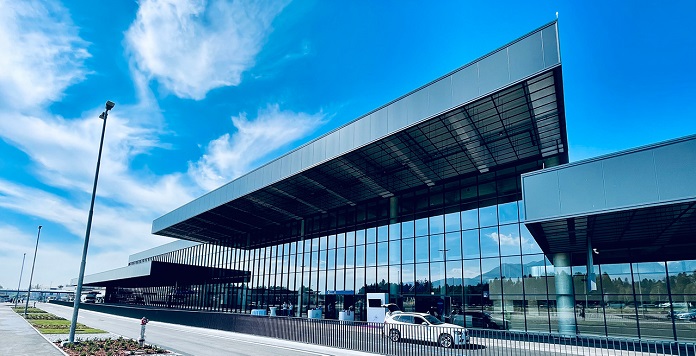 Fraport AG company – officially inaugurated its new passenger terminal at Ljubljana Airport in Slovenia. Fraport invested some €21 million in the ultra-modern terminal which strategically positions Ljubljana Airport to meet the future requirements of travel and tourism. After about a two-year construction period, the new terminal will be open to passenger traffic beginning July 1.

Speaking at the inauguration ceremony, Fraport AG’s executive board member Dr. Pierre Dominique Prümm stressed: “We are confident the terminal will strengthen Ljubljana Airport’s competitive position in the region and internationally. This terminal is a symbol of stepping forward into the New Future.” Fraport Slovenija managing director Zmago Skobir added: “We are ready for the returning growth in traffic, with our new terminal ambiance and attractive offerings for our passengers and business partners.”

Fraport has created an ultra-modern facility featuring 10,000 square meters of area for flexible operations and increased services. Ljubljana’s terminal capacity has doubled to serve more than 1,200 passengers per hour. Along with more space and comfort, the terminal will feature a greater choice of shops, restaurants, and other amenities – with over 1,200 square meters available for retailing initially. Dr. Prümm stated: “In short, this customer-oriented terminal will significantly enhance the travel experience at Ljubljana Airport.”

Despite the difficult pandemic period, Fraport successfully finished the construction of the terminal on time and within budget. Dr. Prümm also emphasized that the terminal is ready just in time for the start of Slovenia’s six-month Presidency of the Council of the European Union at the beginning of July – when Ljubljana will be on the European center stage welcoming visitors from other European capitals.

Fraport’s commitment to Ljubljana Airport goes beyond constructing a new passenger terminal. Since Fraport Slovenija started managing Ljubljana Airport in 2014, Fraport has invested more than €60 million in new facilities, such as the Fraport Aviation Academy, a new fire station, and the new terminal. In addition, Fraport is looking closely at the big potential for cargo and airport city developments in the direct vicinity of the airport. Construction will start soon on a solar energy facility for the airport – part of the Fraport Group’s climate and environmental initiatives in Slovenia and worldwide.

Farnborough Airport’s Movements increase 16% due to FIA22, according to RadarBox