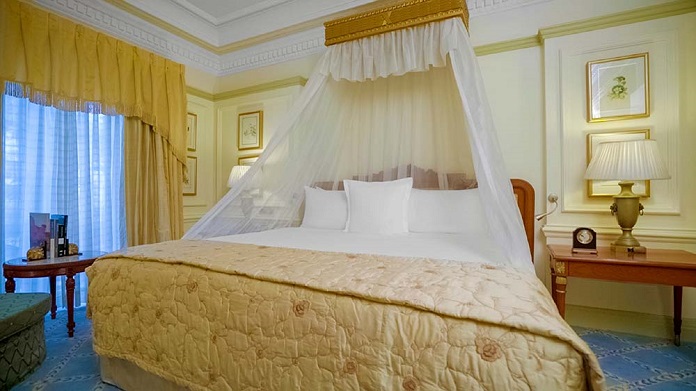 The monumental property has stood witness to a host of changes in the years gone by. Built-in 1982, the hotel opened with 140 rooms and instantly appealed to the elite audience of the city and beyond. The hushed corridors and priceless art décor paintings of the Georgian and Edwardian Era complemented by the regal splendour of the Manor Suites evoke a bygone era of British India. An addition of 100 rooms in 1993 proved that ITC Windsor was ready to keep up with the pace as the IT Capital of India started to take shape in Bangalore. The 100-year-old rain tree on the main porch elicits nostalgia. The secret Lancelot garden on the 3rd floor draws guests for a cup of tea or a long walk while savouring the city’s salubrious weather.

ITC Windsor opened with 4 restaurants. Wellington’s room served continental cuisine and was one of the most popular dining destinations in the city. The restaurant flaunted an absolute English fine dining setup with a dress code of only formals for the guests. Nelsons room was the all-day dining coffee shop serving English tea and an array of dishes, and Royal Dirby was the bar that served premium beverages. The Terrace Grill was an open-air grill restaurant and ITC Windsor was one of the pioneers in introducing this concept.

Royal Afghan, the popular poolside barbecue restaurant that serves a unique cuisine from the rugged Indian North-West frontier remained a constant since the hotel opened. This crowd favourite serves a wide choice of kebabs, vegetarian dishes, Indian breads, and the famous Dal Bukhara.

In the last 4 decades, the hotel has adapted newer restaurants and cuisines perfectly reflecting the culinary supremacy of ITC Hotels. With 3 signature restaurants, one coffee shop, and a bar, ITC Windsor is a food lover’s paradise.

This landmark hotel in Bangalore has played host to several illustrious guests and world leaders such as former British Prime Minister Tony Blair, former German Chancellor H E Gerhard Schroeder, His Holiness the Dalai Lama, Sir Elton John, and Chinese Premier HE Wen Jia Bao. Noble Laureate VS Naipaul and marketing guru Jack Trout are also among the long list of guests who have enjoyed the period appeal, warm service, and the comfort and luxury of this beautiful hotel.

Speaking on the occasion, Mr. Deepak Menezes, General Manager at ITC Windsor said “It is a moment of pride for all of us as we achieve this milestone. ITC Windsor is not a hotel it is an experience to be lived and spoken about. The entire team is very excited to bring back the memories and reminisce as we take a walk down the memory lane of the last 4 decades. It is 40 days of celebration with a range of offers, specially curated menus, and fond surprises as we come together to mark this momentous day”.

Following the brand ethos of Responsible Luxury, ITC Windsor also became the first hotel in the world to achieve LEED Zero Carbon Certification. ITC Hotels has pioneered several ground-breaking initiatives on the environment, hotel ecosystem, health, and well-being. From LEED platinum rating to being one of the first chains to eliminate single-use of plastic-free products, the deployment of radiation harmonisers across the chain, farm-to-fork low carbon footprint cuisine, clean air, and more, ITC Windsor is a notable first in its Responsible Luxury and Sustainability initiatives.