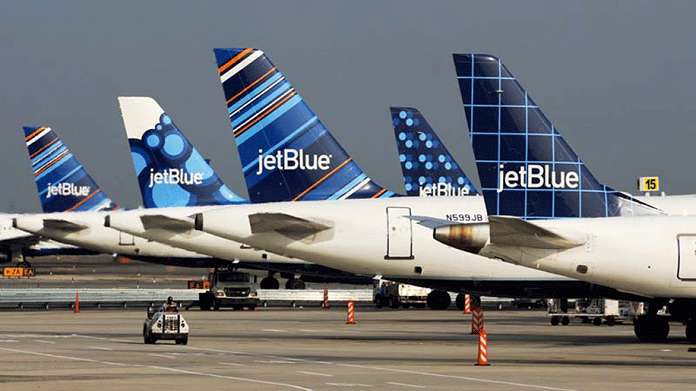 Jetblue has launched a surprise bid for ultra-low-cost US carrier Spirit, which it says constitutes a “superior proposal” to the recently announced merger agreement between Spirit and Frontier.

The $3.6 billion bid – described as “unsolicited” by Spirit – would see Jetblue retrofitting and rebranding Spirit’s aircraft under the Jetblue offering, creating a fleet of 455 planes with 312 Airbus aircraft on order.

Jetblue said that the combined group would create the fifth-largest domestic airline in the US, “turbocharging” the carrier’s network strategy with 1,700 daily flights to over 130 destinations, allowing it to grow in focus cities including Los Angeles, Fort Lauderdale, Orlando, and San Juan, and introducing the Jetblue brand in destinations including St Louis, Memphis, Louisville, Atlantic City, and Myrtle Beach.

The airline said that the proposed transaction would be expected to deliver $600-$700 million in net annual synergies following the completion of integration.

For its part Spirit said in a statement:

“Consistent with its fiduciary duties, the Spirit Board of Directors will work with its financial and legal advisors to evaluate JetBlue’s proposal and pursue the course of action it determines to be in the best interests of Spirit and its stockholders.

“The Board will conduct this evaluation in accordance with the terms of the Company’s merger agreement with Frontier and respond in due course.”

“Customers shouldn’t have to choose between a low fare and a great experience, and Jetblue has shown it’s possible to have both. When we grow and introduce our unique value proposition onto new routes, legacy carriers lower their fares and customers win with more choice.

“The combination of Jetblue and Spirit – coupled with the incredible benefits of our Northeast Alliance with American Airlines – would be a game-changer in our ability to deliver superior value on a national scale to customers, crewmembers, communities, and shareholders.

“The transaction would accelerate our strategic growth and create sustained, long-term value for the stakeholders in both companies.

“While Jetblue and Spirit are different in many ways, we also have much in common, including a focus on keeping our costs low so we can profitably expand and offer an attractive alternative to the dominant ‘Big Four’ airlines.

“We would conduct a full review of Spirit’s product offering, operational and customer technology, and talent pool to optimize the combined airline.”

The move follows Jetblue’s recent announcement of transatlantic flights from its second US airport, with flights from Boston to Gatwick and Heathrow set to launch in July and August respectively, joining existing routes from New York JFK to the two London airports.

An ECG at an altitude of 10,000 meters: Lufthansa uses telemedicine...