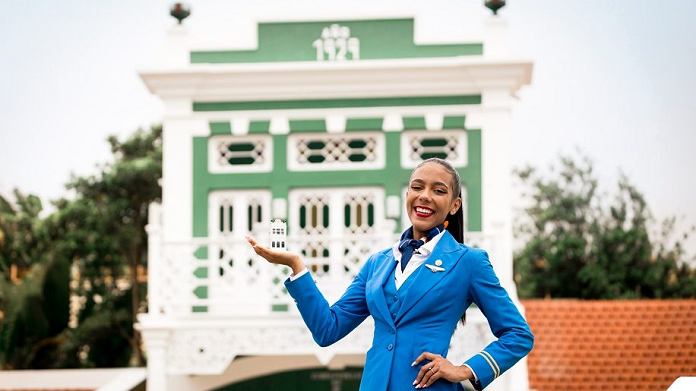 KLM has unveiled its latest Delftware miniature house, as the Dutch carrier celebrates its 103rd anniversary.

Every year since the 1950s KLM has produced a new miniature to coincide with the carrier’s birthday on October 7, which it offers to passengers on intercontinental flights – filled with Bols Dutch genever.

In recent years the carrier has commissioned replicas of the 800-year-old Die Mariaen building located in the city of Den Bosch, and Tuschinski Theatre in Amsterdam.

This year KLM has chosen the Ecury family home on Aruba, built in 1929 and featuring a facade “with classical elements, Caribbean gingerbread detailing and local decorative elements”.

It’s only the second time that KLM’s Delftware miniature has been based on a building outside the Netherlands, the first being the Penha Building in Curacao for the airline’s 85th anniversary.

Aruba will be marking a centenary of aviation next year, and the house is located close to the site where the first aircraft landed. KLM first flew to Aruba in December 1934 using a triple-engine KLM Fokker F-XVIII, with nonstop services from Amsterdam starting in 1974.

Commenting on the news Marjan Rintel, CEO and president of KLM, said:

“I don’t know whether the founders of KLM could have imagined back in 1919 that we would still be celebrating the airline’s anniversary 103 years later. “This year we are doing so on lovely Aruba, a KLM destination for almost fifty years, where we are kicking off celebrations today marking a centenary of aviation on the island.

“KLM has had many ups and downs over the past century, but we’ve always marked our anniversary on 7 October, because we want to keep celebrating that KLM is a wonderful company that connects the Netherlands with the world. We should be proud of that.”