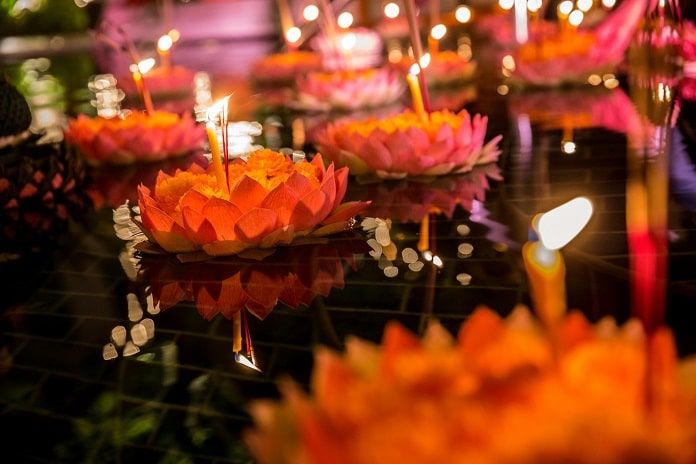 Tourism Authority of Thailand together with The Royal Thai Embassy and Radisson BluPlaza Airport Hotel recently hosted the Loy Krathong evening in Delhi. About 100 guests including diplomats, corporates, media, and the travel trade professionals participated in the festivities held on the poolside of the Radisson Blu Plaza hotel.

The evening was marked by Thai cultural performances from dancers and musicians flown straight from Chiang Mai. This was followed by a special Muay Thai, or Thai boxing performance.  followed by the traditional Loy Krathong procession that was led by Nang Noppamas who was carried on a palanquin to the pool. The guests were invited to float the candles and incense lit ‘krathongs’ into the pool thereby paying respect to the water goddess.

Held every fall, the Loy Krathong festival is a surreal experience, visually a mesmerizing celebration. The name translates to “floating basket,” and traditionally thousands of candle-lit banana leaf boats known as Krathong are released in the water bodies in Thailand to symbolize renewal. Gracing the occasion with his presence at the event was Mr. Chutintorn Gongsakdi, Thai Ambassador to India.

Vachirachai Sirisumpan, Director – TAT, New Delhi said “In these tough times we are very grateful to be able to celebrate the Loy Krathong festival in New Delhi in a small way and pay respect to our Thai festivities, as we pray for better times ahead and wellbeing of everyone. I hope this event gave the guests a glimpse of Thai traditions, art, culture, and cuisine. We would like to thank all our guests who joined us and of course our hotel partners Radisson Blu Plaza Delhi Airport Hotel for their support in making this a successful evening.”

Ashwani Goela, General Manager, Radisson Blu Plaza Delhi Airport said, “It gives us great joy to celebrate the Loi Krathong festival every year and give the people a chance to discover Thailand through Thai culture performances, Thai food with all its simplicity and panache. We would also like to thank our partner Tourism Authority of Thailand & Thai Airways for their support in making this a successful event”

It was a beautiful and picturesque evening as several floating candles, flowers and krathongs decorated the venue showcasing Thai festivals and traditions.

Vietnam eyes full reopening to international tourists from next month

Towards the Safe Resumption of Business Events in Singapore