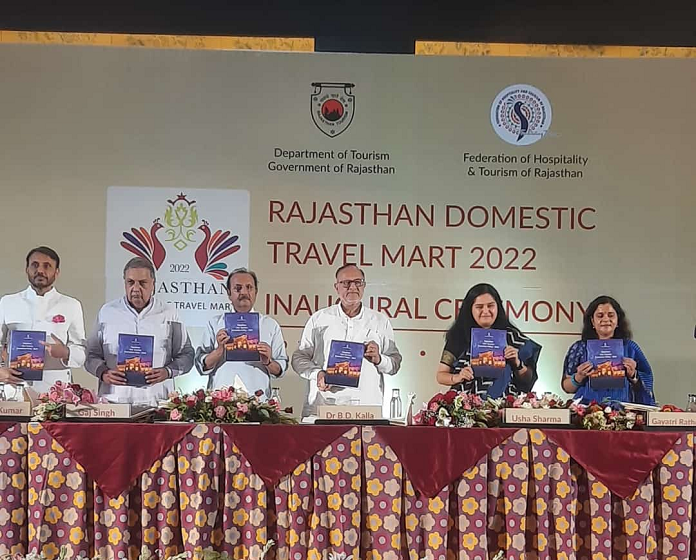 A two-day Rajasthan Domestic Travel Mart, an event where tourism product suppliers from the state meet with buyers from different parts of the country, kicked off in Jaipur. On the agenda of the Mart, which is taking place after a gap of two years since the event could not be held in the intervening period because of Covid, are around 9000 structured business-to-business meetings. Around 200 tourism product suppliers, which include hoteliers and other service providers, and around 300 domestic travel buyers are participating in the event.

This is the second edition of RDTM, which was first held in 2018 and was meant to be an annual feature in the calendar of the travel and tourism industry. However, Covid caused the suspension of the event for two years.

Rajasthan, arguably one of the most preferred states for tourists, especially those from other countries, has Seena fall in the number of foreign tourists due to Covid and the tourism sector in the state, which attributes its survival during the pandemic to domestic tourists, is now focusing on enhancing its allure for the latter category.

Karan Rathore, Vice Chairman, Services Export Promotion Council said, “Rajasthan has something to offer to everyone, from dormitories that are available for Rs 100 to high-end luxury hotels that provide the traveller with a truly royal experience. This has been the strength of the tourism sector in Rajasthan, and the aim of getting buyers and sellers under one roof is to reinforce that image.” At the formal inaugural of the event last evening, Culture Minister B D Kalla said, “Rajasthan has everything to offer to travellers except for snow and the sea. With over 9000 structured B2B meetings lined up, I am confident that domestic tourism in the state will get a further boost.”

A Film Tourism Promotion Policy was also launched at the inaugural session of the Mart. As part of the policy, the government will give subsidies and incentives of up to Rs two crore for films to be shot in the state.

Speaking at the event, Apurv Kumar, President of Federation of Hospitality and Tourism Rajasthan, mentioned that the grant of industry sector to tourism in the state, a first in the country, has helped tremendously by boosting business and creating enormous employment opportunities.

Rajasthan Tourism has launched its Film Tourism Policy 2022 which guarantees enticing incentives and subsidies for movie productions within the state. This was unveiled by Rajasthan’s Minister for Art, Culture, and Education, BD Kalla together with high officers and tourism business stakeholders at the inaugural ceremony of the Rajasthan Domestic Travel Mart 2022 held at Jaipur.

The new film tourism policy is likely one of the greatest by way of incentives and different help assurances, to draw film producers from not solely India but also from Hollywood thereby boosting the native Rajasthani movie business which as Gayatri Rathore, Principal Secretary – Tourism, Rajasthan has put it, is “moving into oblivion” slowly and steadily.

Rathore mentioned that the coverage has provisions to offer a subsidy of as much as INR 2 cr for tasks qualifying the laid down standards of the coverage which features a sure threshold of manufacturing price, and makes use of a minimum of 15 percent native supporting employees within the manufacturing exercise, and so forth. This brand new coverage will present an enabling atmosphere with subsidies and incentives as much as INR 2 crore for every kind of movies – be it regional, Bollywood, Hollywood, or OTT. The 2nd version of Rajasthan Domestic Travel Mart is scheduled to start on July 22.

She added that as per the coverage, the federal government can even present lodging at a 50 percent price at a Hotel company-managed or the Rajasthan Tourism company-operated motels for the movie items.

“There will not be any entry fee for areas under the forest department, monuments, and areas under the government control for film shooting,” she mentioned. To encourage the native business, she mentioned that each one of these Rajasthani movies that make it into the nationwide award system underneath the regional class will probably be rewarded underneath the brand new coverage.  Rathore said that the Film Tourism Policy 2022 has been formulated after in-depth consultations with the stakeholders and due to this fact is likely one of the greatest movie tourism insurance policies in the nation.

Recognizing the tourism business was the worst impacted by the covid-19 pandemic, the state has taken “inclusive, comprehensive and far-sighted” steps to revive the business within the state, Rathore mentioned. Film tourism coverage is one such step that she expects will go a good distance in exhibiting and selling the state to the world within the coming years.

She stated that the federal government has created a Tourism Development Fund of INR 1000 cr which is unprecedented and 60 percent of the identical will go into infrastructure creation and 40 percent for branding and advertising and marketing of Rajasthan within the home and worldwide market.