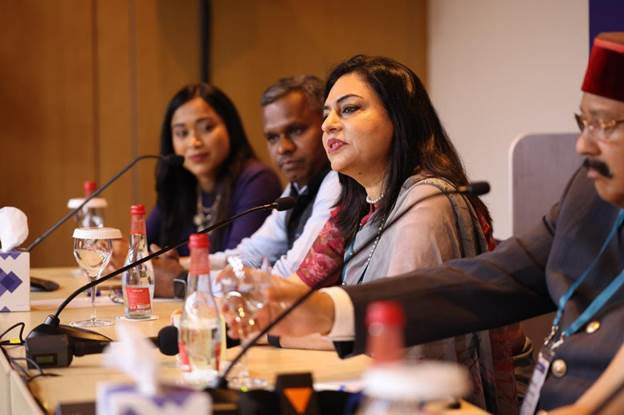 Ms. Rupinder Brar stated that the Ministry has been aggressively promoting different tourism products and destinations. The major focus has been given to the potential of MICE, Film Tourism, Wellness Tourism, Medical Tourism, Luxury Tourism, Wildlife Tourism and Adventure Tourism. She stated that the Middle East has been the major target market for Indian tourism. Large number of tourists from the Middle East visit India for MICE, medical, wellness, luxury   tourism etc. The Ministry of Tourism, Govt of India has been holistically promoting Indian tourism in the Middle East market. Participation in Arabian Travel Mart has been one such initiative by the Government.

Ms. Rakul Preet Singh highlighted the importance of film tourism and the potential of India as an-important destination for film-making, having all physical geographical features and landscape. She further focused on the role of North Eastern States as a potential film shooting destination.

Mr. K. Kalimuthu, Counsul,(Economic, Trade, and Commerce) deliberated on the importance of the Indian diaspora for publicity and promotion of India in the overseas market. He also highlighted the appeal of Prime Minister Shri Narendra Modi of ‘Chalo India’ thereby urging the Indian Diaspora to inspire at least five of their non-Indian friends every year to visit India, calling them ‘Rashtradoot’. He emphasized the role of tourism for the overall economic growth of the country.

The Ministry of Tourism, Government of India under its “Incredible India” brand line has participated at the Arabian Travel Market (ATM), Dubai -2022 being held from 9th to 12th May 2022 showcasing India’s rich & diversified tourism potential and providing a platform to the tourism stakeholders to showcase the various tourism destinations and products including Niche products. Also, the aim is to promote India as a ‘Must See, Must Visit’ destination.

During the Mart, the India Pavilion will be showcasing India as a “365 Days Destination” a year-round multi-faceted tourist destination such as Culture, Adventure, Cruise, Golf, MICE, luxury, wildlife, wellness, and medical tourism etc. India Reopening as a theme has been amplified during the mart with the ‘Namaste Campaign’ to welcome International Travellers showcasing must-visit destinations of India.

Around 18 Participants from India representing the State Tourism Government of Kerala, Nagaland,and Tour Operators, Travel Agents, and Hoteliers/Resorts, will be present in the India Pavilion showcasing the diverse tourism products and services. Apart from this, the State Governments of Uttar Pradesh, Uttarakhand, Madhya Pradesh, and Karnataka are also showcasing the tourism potential that States have to offer.

The Ministry of Tourism’s Official Website (www.incredibleindia.org) showcases India as a holistic destination, revolving around major experiences, such as, spirituality, heritage, adventure, culture, yoga, wellness and more. This website is also available in Hindi and leading international languages.

India to become the hub for spiritual and religious tourism