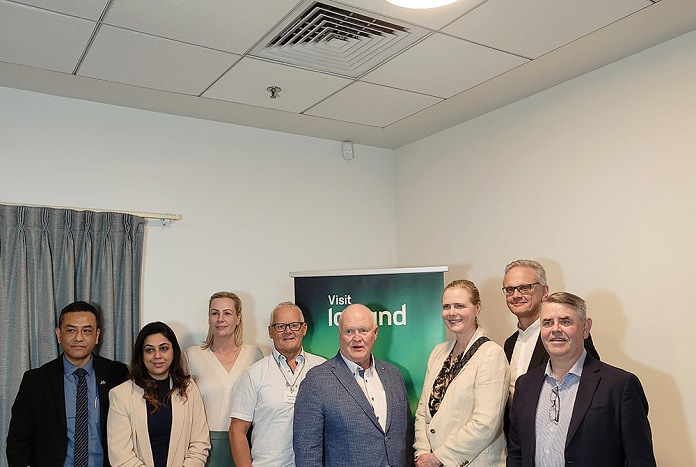 According to figures published in a report by Outbound Travel & Tourism International, India’s outbound travel market will reach US$93 billion by 2030. With travel trends and figures reviving to almost pre-pandemic levels, destinations are reviving their sales plans and marketing strategies to lure back Indian travellers.

Identifying India as the first major Asian market to open after COVID, Visit Iceland felt it was important to tap into India’s potential to experience a swift revival. With breath-taking glaciers, Northern Lights, clean air and geothermal heated pools, Iceland is definitely a destination that will catch on the imagination of the intrepid traveller.

Visit Iceland and the Embassy of Iceland in New Delhi recently hosted a press meet to re-introduce Iceland as a tourism destination and talk about their plans for 2022-2023.

“We are looking at the segment of WHOPS (wealthy healthy older persons) in India who are looking for a more immersive and experiential part of Europe that Iceland offers. Honeymooners also enjoy the pure luxury of solitude and expansiveness that Iceland has, so they should definitely look at it as a destination” said Jonsson, adding, “in 2019, 19,852 Indians visited Iceland, which was a steady increase from 10,944 in 2017. However, these numbers came down drastically in the last two years due to the pandemic and now Iceland is back in India to work on these numbers as India a potential source market for its tourism.”

Though the biggest source markets for Iceland are the USA, Canada, the UK, and other countries in Europe; India is also a focus market thanks to its vast population’s potential to travel.

Film tourism is another important aspect that Iceland wants to explore further – the mountains that were the backdrop in the Shahrukh Khan song ‘Gerua’ were the Vestrahorn Mountains and the entire song was shot primarily in Iceland. With the iconic shots of Game of Thrones also of Iceland, the delegation touted the country as a prime location for potential film and OTT series shoots.

With the long waiting times for Schengen visas becoming a roadblock to travelling to Europe, the Iceland Embassy in India is working towards solving the issues that travellers are facing. “We are aware of the situation that visas remain a concern this holiday season for European countries,”said  Ms. Kristín Anna Tryggvadóttir, Deputy Head of Mission, Embassy of Iceland in New Delhi , adding, “so we are offering slots every week to apply for a Schengen visa to Iceland and we hope this helps people to travel to the destination. But I would advise travellers to be mindful of delays and plan their trips at least six months in advance. ”

H.E. Mr. Gudni Bragason, Ambassador to New Delhi said, “ India is the first major Asian market to open after Covid, it is most important for us to tap its potential. Travel had almost stopped during the pandemic, but now we are hoping for a swift revival. Iceland has a lot to offer for Indians as our nature is strikingly different from anything you can experience in India. There are breathtaking Glaciers, Northern Lights, Clean Air, and Geothermally heated pools. Besides, Icelandic food is known for its freshness and can easily be adapted to the Indian palette. Through this Roadshow and interactions, our aim is to further promote our destination and interact with the Travel Agencies in India and present them with opportunities of selling Iceland while understanding the obstacles they face in doing so.”

Ms. Deepika Sachdev, Advisor for Tourism, Culture & Public Diplomacy, Embassy of Iceland in New Delhi says “Tourism is the fastest growing connection between India and Iceland. There is a fast-growing interest among Indian travelers to visit Iceland to experience its natural beauty and of course the Northern lights. Indian travellers are not afraid to brave extreme cold weather as a survey revealed a 34 percent growth in Indian travellers wanting to visit Iceland. Thus, there has been a rapid increase in the number of tourists from India over the past four years. At the Embassy it is our constant endeavor to promote Iceland as an exotic tourist destination for Indian travelers. Iceland is on the bucket list of many people and it is an excellent location to witness Northern lights and its picturesque landscape.”

Currently, there are no direct flights between India and Iceland which is a major deterrent for travellers.

Arsaell Haroarson, Regional Manager, IcelandAir said, “We do offer excellent connectivity via other European cities that subsequently connect to Reykjavik. We are hoping to have flights that originate from India directly to Iceland as that is always a major driver of tourism.”

Thomas Cook India reiterates that it is a completely separate entity...