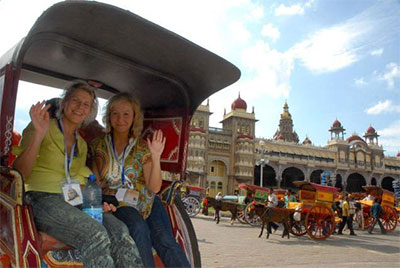 The reason for growth deceleration, according to the Survey is due to negative or low growth in FTAs from high spending tourists originating from European countries like France, Germany and UK.

Despite slow down in inbound, the survey notes increasing appetite among Indians to travel within the country thereby supporting the sector’s growth. In 2014 domestic tourism grew by 12.9%. The top five states in domestic tourist visits in India are Tamil Nadu, Uttar Pradesh, Karnataka, Maharashtra and Andhra Pradesh. The report also explains various schemes announced by the government like Swadesh Darshan; PRASAD, etc. to boost domestic tourism in the country.

The economic survey also take note of the governments vision to tap the potential of shipping tourism in the country. A vision document for coastal shipping tourism and regional development has been prepared with a view to increasing the share of the coastal/inland water-ways transport mode from 7% to 10% by 2019-20, the survey notes.

According to the survey, the services sector in India has remained the most vibrant sector in terms of contribution to national and state incomes, trade flows, FDI inflows, and employment. The services sector contributed almost 66.1% of its gross value added growth in 2015-16 becoming the important net foreign exchange earner and the most attractive sector for FDI (Foreign Direct Investment) inflows. Despite the slow down in the post crisis period (2010-14) India showed the fastest service sector growth with a CAGR (Compound Annual Growth Rate) of 8.6% followed by China at 8.4%. In 2014 India’s services sector growth at 10.3% was noticeably higher than China at 8.0%.