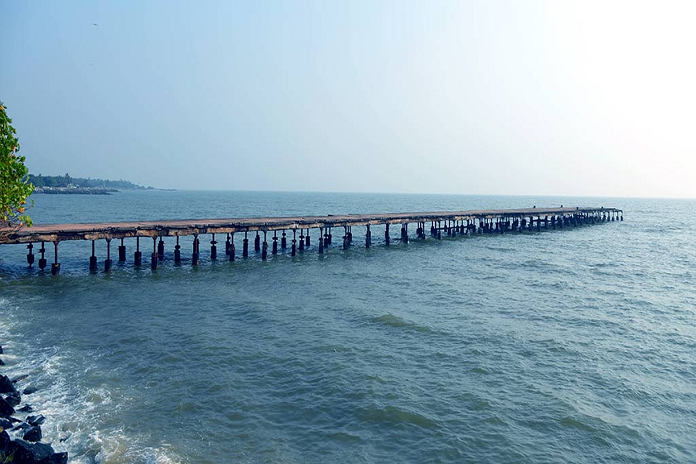 Far ahead, on the horizon, golden glowing embers of the sunset burst into the sky. The gentle ocean waves sing paeans to the setting sun. If you walk further into the sea, along the ancient pier, you may be able to hear the many historic tales it whispers. You are at the Thalassery Kadalpalam, a sea bridge that was built in the early 20th century when Thalassery was a busy commercial hub.

The 500-ft long bridge was built by the British in the Kannur district in Kerala and looks out into the Arabian Sea. It is 24 meters wide on the shoreside and 40 meters wide at the sea end.

History has it that during European rule, this pier was used as commercial access to and from the Thalassery Bazaar. The shallow water and large rocks often caused shipwrecks which lead the British East India Company to build the pier in 1910 for easy transportation of goods to and from ships. The pier was instrumental in the development of the town into a buzzing commercial hub. Thalassery was a busy commercial center shipping articles such as pepper, coffee, fish, spices, wood, and so on. Over time, the significance of the port diminished, and its gradual decline began with the emergence of other ports.

This relic from colonial times is often frequented by travelers who come here to enjoy the sunset and experience some tranquil moments. It lets you time travel, into space and an era that was rich in adventure. Come and explore!

It’s a rickety ride, bobbing and bouncing off the rocks, as you wend your way on the off-road track paved by Nature herself! After the thrilling, adventurous ride, you reach the pinnacle where two giant rocks await you in all their splendour. These mammoth rocks lean on each other and overlook the deep valley. In its shape, the structure resembles a tortoise and hence the name Amappara [tortoise-rock].

Perched at the crest of the hill, the rocks look as if they hang from space. To reach there, you need to hop over a set of huge boulders, squeeze yourself through a jumble of rocks and continue your journey. Continue walking until you reach the pinnacle, where the rocks gape into the lush valley. As you stand sandwiched between the rocks, gazing at the verdant valley and rolling hills, time stops. You can explore the many caves and boulders as you spend time here, and each offers a tranquil moment.

The perfect offbeat getaway for adventure enthusiasts, Amappara, near Ramakkalmedu in the Idukki district, is an emerging tourist destination that offers grand views and adrenaline high. The ideal option to explore Amappara would be to take a jeep ride from Thovalappady junction on the Thookupalam – Ramakkalmedu stretch. According to local lore, the mythological heroes of the Ramayana – Rama and Lakshmana – spent some time here during their search for Seetha!

A plethora of viewpoints are present near the Amappara, and each has a local name. For instance, the ‘flight view point’ offers a magnificent bird’s-eye view of the many villages in the valley. Each ‘view point’ is fitted with protective fencing to ensure the safety of the travellers.

Madayipara – A Medley of Colours

Every season, life changes here. A laterite hillock that blushes in a melange of colours every season, Madayipara in Madayi, in the Kannur district of Kerala has a mystery to it. Any traveller visiting this glorious landscape will be in awe for it changes its nature and surprises you with glorious colours if you walk into the place every other season.

Come summer and the plateau blushes in a golden shade, as grass covers the hillock. During the monsoons, the rain blankets it with a green hue, while spring sees it bursting in shades of blue, as blue flowers carpet the area. Spread across an area of 700 acres, Madayipara is an ecological haven that is home to a wide species of flora and fauna, including bird and butterfly species. This flat-topped hillock is situated on the banks of the Kuppam River.

History sleeps here. Madayipara was the administrative centre of the Ezhimala kings. The place also has an ancient fort called the Madayi Fort which was built by the Vallabha king of the Kolothu dynasty. One can also see the remains of an ancient Jew settlement in the form of a unique pond which is in the shape of a handheld mirror. Four watchtowers still stand here. It is also a much-visited pilgrim destination as the Madayi Kavu hosts the Pooram festival.

Madayipara has something in store for everyone. This secluded spot is famous not only for its surreal and ever-changing appearance, but also for many vibrant historical narratives, ecological significance, and religious ambiance. It is time to explore this land of wonders.

Kundamkuzhy Fort – A Walk to Remember

A walk into a fort is akin to a walk into a page in history. With countless narratives, the fort stands tall and whispers tales of triumphs and losses. The Kundamkuzhy Fort, though in ruins now, recounts tales of a glorious past.

Located in the Bandadka village in Kasaragod, the Kundamkuzhy Fort is a land fort that dates back to the time of the Bednur Nayaks. This square fort is made of laterite blocks and rests in the valley of laterite hillocks. The fort was constructed to ease and facilitate trade from the coastal towns to the Mysore plateau.

A 5 m broad passage on the western wall opens into the fort. A stepped well can be seen on the west of this passageway. The fort has undergone restoration in certain areas and can be observed in some structures, including the entrance. It is believed that earlier the entrance was through the eastern side.

A moat runs to the east, west, and south, and it can still be seen today. The wall-walk can be seen running internally, and from the wall-walk, the steps lead to the top of the bastion.

To explore the unexplored, head to Kundamkuzhy Fort!

From October 31, you can fly to Gujarat’s Statue of Unity...