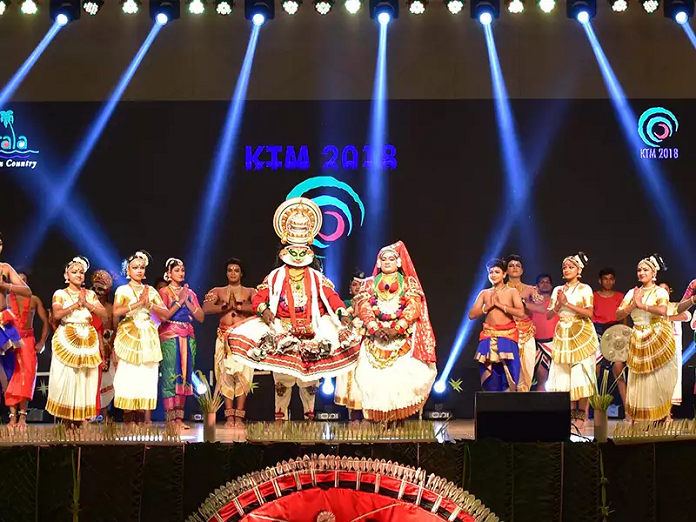 11th Edition of Kerala Travel Mart (KTM) 2022 gets a  colourful start, offering a cultural feast to delegates from India and abroad.  Governor of Kerala, Arif Mohammed Khan, stated that the strategy of the state government is also to position the state as the experiential tourism hub of the country by stitching together the unparalleled natural beauty, rich art, culture, and heritage of the state.

Inaugurating the 11th edition of the Kerala Travel Mart (KTM) in Kochi, the Governor of Kerala, Arif Mohammed Khan has said that the state is all poised to emerge as the premium experiential tourism destination of the country.

A meaningful engagement among different States is crucial for sustainable and inclusive development of tourism, Governor Arif Mohammad Khan said.

The post-COVID recovery efforts provide the apt time for States to further strengthen cooperation and coordination in tourism for common good, he said while inaugurating the eleventh edition of the Kerala Travel Mart (KTM), the country’s biggest tourism Business-to-Business (B2B) event.

Noting that prolonged restrictions on international flights owing to the pandemic had nourished Kerala with domestic tourism, the Governor said tourism, apart from being an economic activity, was a cultural experience that transcended borders. “Being conscious of the need for a robust partnership in reviving tourism, Kerala has ensured healthy government-industry collaboration in tourism, setting a win-win situation. The State is eminently qualified to become the premium experiential tourism hub of India,” he said.

Approximately 55,000 business meets are expected to be held from May 6 to 8, when the mart will be held at Sagara and Samudrika convention centers in Willingdon Island.

Mr. Khan hailed the government for coming out with a set of new products and projects to meet the demands of post-COVID tourism, including farm tourism, caravans, and adventure packages. Kerala’s noticeably rural character ensures that every little village has a pleasant surprise for guests. He also lauded initiatives to promote tourism in lesser-tapped north Kerala like the Malabar River Cruise project, Beypore Water Fest, and Responsible Tourism ventures. Kerala also ensured that Ayurveda-reliant institutions were run professionally, thus maintaining the reputation as a wellness destination, he added.

Entrepreneur MA Yusuff Ali, Chairman of the LuLu Group, who was the guest of honour, said that by organizing the KTM 2022, Kerala would be able to send out a positive message to the world that the destination is ready to receive tourists. He said that while there is a lot of interest among travelers from around the world to visit Kerala and explore the natural and cultural beauty of the state.

However, the state requires infrastructure investments to create world-class experiences that travelers expect at a destination. He also asked the tourism industry in the state to focus on quality service delivery at all times without any compromise. He called for more investments in infrastructure development and capacity building, in the context of increasing demand created by new trends in post-pandemic tourism.

KS Srinivas, Principal Secretary – Tourism, Kerala; spoke on how the mart has gifted the State a “great opportunity” to strengthen tourism that was in the doldrums due to the pandemic. Venu V, Additional Chief Secretary, Kerala and the key architect of the KTM, praised the public-private-partnership (PPP) model of tourism development that became synonymous with Kerala and Kerala’s tourism growth.  He said KTM-2022 demonstrated the resilience of the people of Kerala, ending two years of the slump in the sector.

VR Krishna Teja, Director – Tourism, Kerala, made a presentation on how Kerala Tourism is trying to knit together an experience comprising nature, culture, adventure, wellness, exploration, unique stays, etc., to enhance the average overnights of a visitor in the state.

Baby Mathew, President, KTM said that the Kerala Travel Mart has evolved into a brand in itself over the last two decades. He said that the overwhelming participation of buyers and sellers irrespective of the challenging environment shows the interest of the trading world over in God’s own country.

More than 300 overseas buyers from 69 countries and 0ver 1000 domestic buyers from 25 states of India are participating in the three-day show.

From October 31, you can fly to Gujarat’s Statue of Unity...