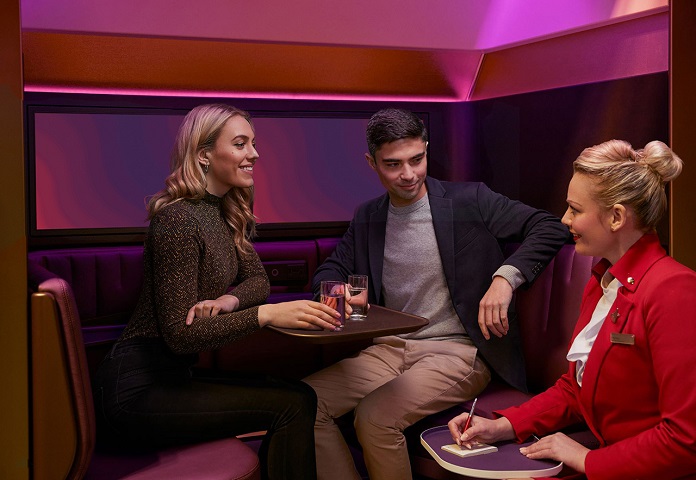 Virgin Atlantic is to introduce a second configuration for its A350 aircraft, which it says is “designed specifically with the airline’s leisure customers in mind”.

The A350-1000 will offer a total of 397 seats – 16 Upper-Class suites, 56 Premium seats, and 325 economy seats (of which 45 will be Economy Delight, offering extra legroom as well as priority boarding and advanced seat selection).

This compares to the carrier’s existing fleet of seven A350s, which are configured with a total of 335 seats – 44 in Upper Class, 56 in Premium, and 235 in the economy.

The smaller Upper-Class cabin has also led the carrier to redesign the social space on the aircraft, replacing The Loft (which can accommodate up to eight passengers) with The Booth – a smaller space “providing comfy lounge-style seating for two, separated by a single leaf table”, with two 27-inch touchscreen monitors.

Virgin said that “The content of the monitors will be continuously updated, tailored to the route and time of day, meaning that the look and feel of The Booth will evolve over time”, adding that “Initial content will include a digital art gallery featuring up and coming artists and a tail and belly cam of the aircraft”.

Virgin’s Heathrow-Orlando is set to be the first route to feature the newly configured aircraft (named Fearless Lady, after Richard Branson’s late mother Eve) from December, followed by other leisure destinations including Barbados “later in 2022”. A total of five A350s are set to be delivered with the new layout by June 2023.

“We’re famous for our onboard social spaces and the introduction of The Booth elevates the customer proposition for our leisure travellers to new heights. We love creating brilliantly different experiences, which is why we’re always evolving our ideas to offer something different and exciting in the air and on the ground.

“I’m delighted that we’ve curated The Booth specifically for our customers jetting off on holiday to our sunny destinations, such as Orlando, offering a truly stylish start to their trips.”

Cathay Pacific’s July traffic is still 98 percent down on pre-pandemic...