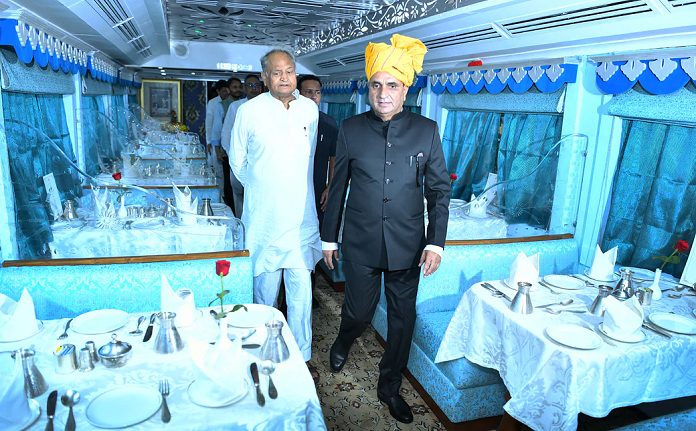 Apart from Delhi and Agra, the train will embark on a seven-day journey to the beautiful cities of Jaipur, Jodhpur, Udaipur, Chittorgarh, Jaisalmer and Bharatpur, which will attract both domestic and foreign tourists

OChief Minister Ashok Gehlot flagged off the popular ‘Palace on Wheels’ at Gandhinagar Railway Station on Saturday, over two years after the luxury tourist train had suspended operations in the wake of Covid. The chief minister said the royal train service has been enthralling tourists for 40 years and this is an example for the world. “Its resumption indicates that tourism sector in the state is going to emerge stronger,” he added

Prior to its departure, Gehlot took stock of the facilities inside the train. He wished the passengers a happy journey and said it was a matter of pride for the government to re-operationalise the service.

Under the joint aegis of the Railways and Rajasthan Tourism Development Corporation, modern furnishings and additional amenities have been included in the train, he said.

To promote tourism, Gehlot said his government has accorded “industry” status to the sector and that a sum of ₹1,000 crore has been set aside in the 2022-23 budget.

The first royal train was flagged off in 1982. As a result of change of rail gauges from time to time, the second train was built in 1991 and the third in 1995, an official statement said.