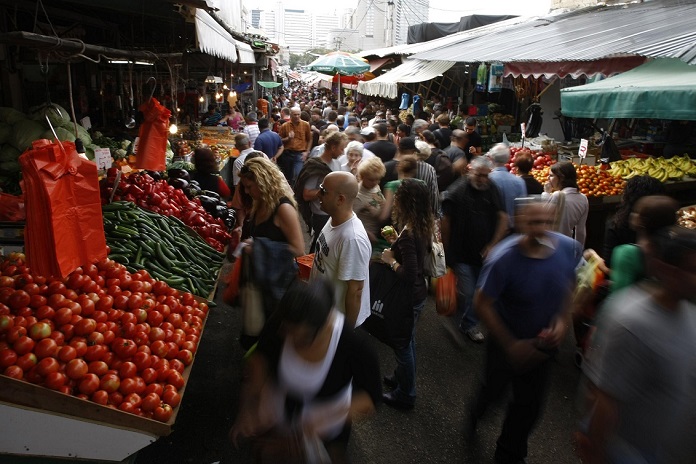 Tel Aviv-Yafo, a city that is recognized globally for its thriving and diverse culinary scene, was named as one of BBC Good Food’s “Destinations for Foodies in 2020” due to the city’s status as a magnet for “lovers of plant-based food” – according to Happy Cow.

With around 40 vegan, 44 vegetarian and 171 vegetarian-friendly restaurants in Mediterranean city, over 4% of Tel Aviv-Yafo residents define themselves as vegan and 4.5% self-define as vegetarian, according to a new survey commissioned by Tel Aviv Global & Tourism ahead of World Vegan Day (November 1) and World Vegan Month.

Home to approximately 450,000 residents, the representational sample carried out by Geocartography Knowledge Group reveals that nearly 40,000 Tel Avivians are either vegan or vegetarian.  An additional 30,000 residents (6.6%) identify themselves as pescatarian (seafood).

The new data also reveals that an impressive 37.4% of Tel Avivian meat-eaters have substantially (13.1%) or slightly (24.3%) reduced their meat consumption over the past 12 months.  A total of 31% of meat-eaters in the city plan to reduce their meat consumption during the coming year, and 2.2% hope to completely eliminate meat from their diet. Almost half (48.8%) of Tel Aviv-Yafo residents eat an entirely vegan meal at least twice a week, the survey found.

Earlier this year Tel Aviv was given the prestigious title of the “Vegan Capital of the World” attracting food enthusiasts, especially vegetarians, from all over the globe.  As we know, food is one of the few factors for Indian travellers when choosing a holiday destination and Israel is country Indian travellers can visit and enjoy delicious vegetarian Mediterranean food all year round.”

From fresh juice stands lining the Start Up city’s boulevards to heaving hummus bars and Middle Eastern-inspired vegan gourmet dining, it is no surprise that the culinary scene of Tel Aviv-Yafo has also become a leading and permanent fixture on the vegan map of the world.

Tel Aviv-Yafo is also home to an innovative “new Israeli” cuisine that fuses together multiple culinary cultures, creating a foodie haven that draws visitors from across the globe.  A testament to the popularity of this cuisine has been the rapid increase of Tel Aviv inspired restaurants and cafes worldwide in recent years.

Eitan Ben-Ami, director of the Environment and Sustainability Authority at Tel Aviv-Yafo Municipality: “The results of the survey demonstrate a positive and impressive trend of healthy eating among the residents of Tel Aviv-Yafo, primarily resulting from a shift towards a sustainable Mediterranean diet, as recommended by the World Health Organization.  The diverse food scene here, including many vegan restaurants, makes Tel Aviv-Yafo an exciting culinary experience for residents and visitors alike.

I am delighted to see that Tel Aviv-Yafo Municipality’s efforts to encourage sustainable and healthy eating are being reflected across the city, benefiting both residents and the environment.”

Tel Aviv-Yafo is a leading partner in international efforts to promote plant-based, healthy and sustainable diets.  In April 2019, the city was elected as Coordinator of the Steering Committee of the Milan Urban Food Policy Pact (MUFPP), a partnership between more than 200 member cities.  Tel Aviv-Yafo is also a member of the C40 Cities Climate Leadership Group, which sees promoting sustainable diets as an important factor in reducing greenhouse gas emissions.

The municipality’s “Bon Appetit” program, established as a result of Tel Aviv-Yafo’s membership in the MUFPP, works with municipal departments, non-governmental organizations and government ministries to promote food security, access to healthy food, sustainability education, food waste reduction and a healthy lifestyle among all residents.

Las Vegas to Showcase More Than $6 Billion of New Offerings...