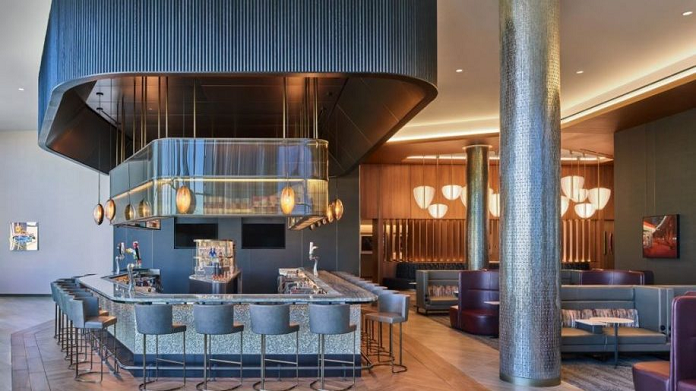 Delta has unveiled its new Sky Club at Chicago O’Hare International, following the carrier’s move from the airport’s Terminal 2 to Terminal 5.

The new 22,000 square foot (2,050 sqm) Terminal 5 lounge is four times the size of the one it replaces in Terminal 2, and features design elements including wrapped columns, signature lighting fixtures, stone countertops and custom furniture, as well as works by local artists including large-scale neon art, sculpture and mixed media.

Facilities include two buffet food counters, and a full-service bar and an additional wine bar – which Delta says is the only one of its kinds in the carrier’s network – featuring an overhead rack holding premium whites and reds.

There are also four showers, privacy sound booths, and a family room for nursing mothers.

Guests will be able to board selected flights via boarding bridges connected directly to the lounge, with two separate gates located near the club’s entrance and behind the wine bar.

Delta operates over 40 peak-day departures out of Chicago O’Hare to eight of the carrier’s nine US hubs, and the airline said that by relocating to Terminal 5 it would now be “conveniently located in the same terminal as the airline’s SkyTeam and joint venture partners, eliminating the need for international customers to transfer terminals and re-enter security when flying through ORD”.

The Chicago O’Hare lounge is the fourth Sky Club to open this year, following the unveiling of facilities at New York’s La Guardia, Los Angeles International, and most recently Tokyo Haneda.

“Chicago is a global city that connects travellers to destinations all around the world, and we wanted to elevate our presence here to give our customers the premium experience they deserve.

“Guests will find much to love in this new space – in addition to its amenities and stunning design, the T5 lounge offers one-of-a-kind experiences unique to our Club network.”