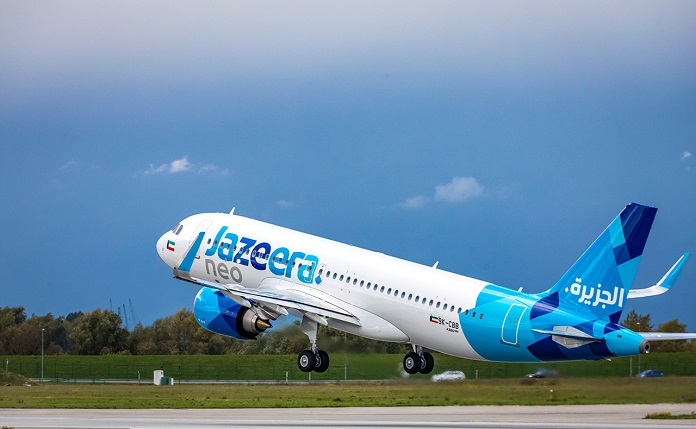 Jazeera Airways returned to profitability for the year 2021, a period which continued to be affected by the Covid-19 pandemic and restrictions on travel, reporting a net profit of KD7.1 million for the year, up 126.8% from the previous year. The earnings were supported by an increase of 48.2% in the number of passengers flown, which reached 1.0 million, while load factors increased by 3.9% to 66.8% and yield increased by 28.6% to KD73.9.

The airline returned to profitability in record time during the third quarter of the year following a second year impacted by restrictions and limitations in capacity imposed on travel at Kuwait International Airport, and globally, in response to the continued spread of the Covid-19 pandemic.

Commenting on the results, Jazeera Airways Chairman, Marwan Boodai said: “Jazeera’s performance in 2021 is proof that its flexible and resilient business model continues to safeguard customers, employees, and shareholders in times of crises.

Financially, our airline took the right steps to control costs and limit cash burn, while operationally we focused on new destinations that satisfied an appetite to travel to destinations marked “Covid-safe” as well as catering to a high and latent demand for connecting flights between the Middle East, Asia, and Europe.”

Operations at Kuwait International Airport remained at limited capacity during the first nine months of the year, with restrictions imposed and direct flights suspended from 35 countries.

The fast roll-out of vaccinations in Kuwait contributed to the ease of restriction in the second half of the year, with PCR tests mandated upon departure and arrival to limit the quarantine in Kuwait.

Speaking of the airline’s performance, Jazeera Airways Chief Executive Officer, Rohit Ramachandran, said: “The challenges that the pandemic brought about in the travel industry in 2020 also opened new opportunities for our airline: cargo operations, charter flights, and connecting routes were expanded to benefit our business. We were resourceful in adapting our business operations which enabled us to get through a very difficult period and come back strongly in 2021.”

The airline also rolled out its summer schedule with favourite destinations for tourists, such as the Lebanese capital, Beirut, and other popular summer destinations including Tbilisi (Georgia), Trabzon, and Bodrum (Turkey).

Jazeera also took delivery of four Airbus A320neo aircraft during the year, bringing the fleet to 17 aircraft. Jazeera Terminal T5 saw its second quarter of profit in Q4 2021, ending the year with a net

Jazeera placed a new fleet order with Airbus for 20 A320neos, 8 A321neos, and 5 further options. The deal is valued at US$3.4 billion (KD1.3 billion). The order will effectively double Jazeera’s current fleet size to 35 aircraft, supporting the airline’s expansion plans to further boost its contribution to Kuwait’s travel sector. The aircraft mix aims to give Jazeera flexibility to extend its network to medium and longer-haul destinations from Kuwait, offering passengers more choice to travel to popular destinations as much as underserved ones.

Positive Outlook for 2022 and Beyond

Boodai concluded: “We are confident that restrictions on the travel sector will only continue to ease, and traffic will return to pre-Covid-19 levels. Countries around the world have started to fully open their borders. As for Jazeera, we are looking forward to moving forward with our expansion plans, growing our network and fleet as well as our business capabilities.”

Somon Air has been awarded with Brand of the Year Award...