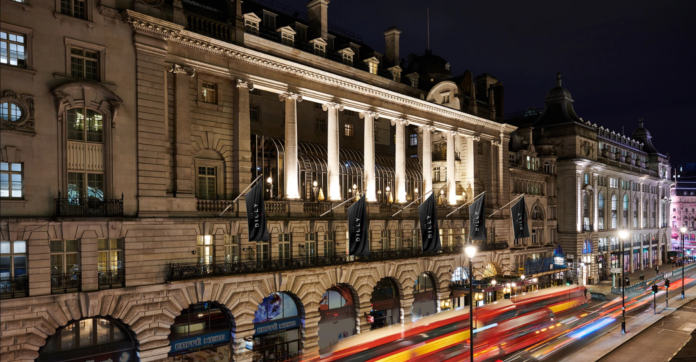 In early 2021, the 283-room hotel currently managed by Marriott International will become the independently owned and operated The Dilly.

Renovations have already begun and once finished will include two food and beverage outlets, The Terrace and Madhu’s – an Indian pop-up restaurant.

It will also feature one of London’s largest underground swimming pools, The Piccadilly Health Club and Spa (including two squash courts and personal training), a dedicated dance studio, a florist lobby shop Pulbrook and Gould, and seven meeting rooms.

Guy Pasley-Tyler, director portfolio, and fund management at Archer Hotel Capital said: “This is the first hotel in the Archer portfolio to be operated independently and thus it is the first to develop its brand. The transition and rebrand of The Dilly will be our renewed focus with immediate improvements to include a new exterior design to the entrance of the hotel and lobby refurbishment, plus an on-going bedroom redesign.”

Alex Pritchard, director of Axiom Hospitality, added: “We believe The Dilly has the potential to be the place to see and be seen in Piccadilly as it once was. This year has been difficult but has allowed us to re-focus on why this city is one of the greatest in the world to welcome guests back to. There are over a million small businesses in London and sourcing from them is going to be our top priority. We want to find those that can give The Dilly a really special, local feel, which we believe is a new concept for London, whether it be with flowers, guest amenities, food or London sourced drinks – we are currently searching and at the same time, we want to encourage these independent entrepreneurs to come and find us too.”

The Dilly’s general manager, James Olivier, said: “When you explore everything that makes a location the place to be for business or pleasure, or simply to recharge, this is it – London’s epicenter, Piccadilly Circus and a meeting point known throughout the world. Our hotel’s very name is memorable, playful and ultimately inspired by our address in the center of London on Piccadilly – we are London.”

“The Dilly has a unique and colourful past,” he continued. “It was part of London’s Edwardian society and it embraced diversity throughout the 20th century; it also has a special place in the history of the area and Piccadilly in particular. As a newly independent hotel, we are able to bring new life to this heritage building, celebrate its past, preserve its romance and tell its stories to deliver a true London experience to every guest.”

Archer Hotel Capital owns a portfolio of upscale and luxury hotels throughout Europe, all of which are located in gateway cities. These include Hotel Arts Barcelona, Westin Palace Madrid, and Renaissance Vendôme Paris.

The group recently acquired the five-star Conrad Dublin. The Dilly will become its first independent hotel. Axiom Hospitality was established in 2020 by Alex Pritchard and Jamie Lamb. It currently has seven hotels under management across Europe.

The LaLiT group helps in the fight against Covid 19