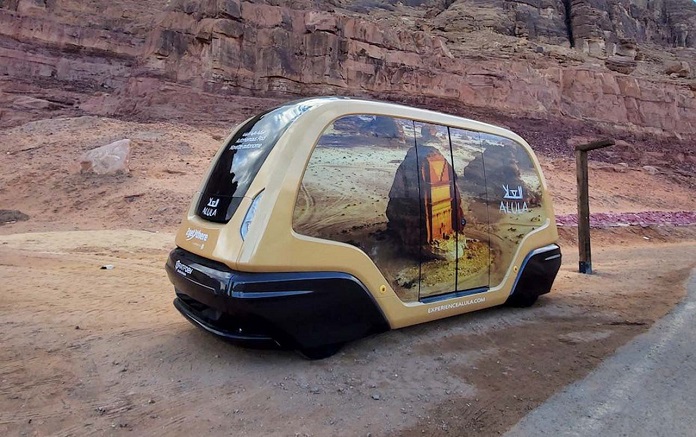 The innovative pilot scheme provides passengers with a quick and easy link to AlUla’s Old Town from the south car park. The service is part of the RCU’s comprehensive journey through time (JTT) master plan to develop a range of fully integrated, accessible, and environmentally friendly public transport options, a statement said.

Serving the local community, the smart pod operates from 4 pm to midnight each day. Electric powered, the pod can carry up to 22 people (8 seated and 14 standing), although capacity will be limited to eight during the pilot scheme.

Passengers can ride the pod free of charge along a circular route. Each leg takes just three minutes to cover 1km. As the pilot continues, the pod service will be expanded to other areas of AlUla, including Dadan, Hegra, and AlJadidah, later in the year.

Passengers seated or standing onboard can enjoy the journey while an informative instructional video is played. Utilising the latest in electric vehicle battery technology, the pod can be fully charged in just 15 minutes, giving enough power to travel 50km.

The pilot allows RCU and engineers from the pod’s manufacturer, ZF 2getthere, to monitor energy consumption, connectivity and practicality before rolling out the autonomous service across specially chosen sites in AlUla. In addition, the pod’s position, progress, and performance are monitored by teams based at RCU’s Smart County Control Platform, while cameras can be added to enhance passenger safety and capacity planning.

RCU worked closely with esteemed public transport company and technology specialists RATP Dev, a wholly-owned subsidiary of the RATP Group, to source the pod. ZF 2getthere has provided the first pod and another will be made available from manufacturer EasyMile.

Amr AlMadani, CEO, RCU, said: “The pod will give visitors and members of the community a viable and attractive alternative to using personal cars and SUVs to travel around the town and, as the service expands and grows, to surrounding areas. Seamlessly connecting AlUla’s people and places, the pod service, which is being offered alongside a variety of alternative transport options, will enhance the area’s bourgeoning appeal to an international audience while enhancing both its smart and environmental credentials among residents. When fully operational, the network will deliver a convenient, quick, fun, and enjoyable mode of transport linking AlUla’s main heritage and urban sites with its existing and expanding infrastructure plans.”

Denis Guillois, CEO, RATP Dev Saudi Arabia, said: “RATP Dev Saudi Arabia is thrilled to be supporting the Royal Commission for AlUla as it puts smart mobility solutions in place for the benefit of all visitors and residents. We are proud to contribute to the long-term preservation and development of AlUla and Hegra, Saudi’s first UNESCO World Heritage Site, through the design and operation of this innovative autonomous pod project.”

Sander Peeters, CEO, 2getthere, added: “With our pod being part of a complete Autonomous Transit System (ATS) at AlUla, we will deliver a turn-key ultramodern mobility solution that will enhance the future of sustainable transport. It will reduce the use of personal cars and solve congestion, including parking issues. At the same time, it’s fun and very comfortable to ride in our pod, with four times more conditioned and filtered airflow than in a normal diesel or e-bus.”

RCU’s long-term plans include making autonomous pods available to residents and visitors to AlUla via an ‘Uber-style’ service, with bookings made on a smartphone application fully connected to RCU. As a further innovation, RCU is co-developing digital paper touchscreens to be placed in each pod station that can call pods on demand.

There will be a two-week break in the pilot scheme to allow the pod to be shipped to Dubai, where it will be maintained and displayed to industry leaders at the Transport Congress Exhibition (TCE) from February 6-8.

The Top Things to Do in Saudi Arabia