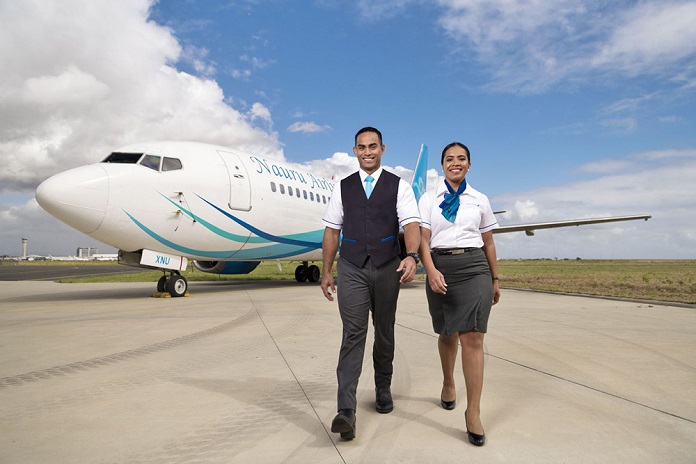 Air Nauru, the Nation Airline of the Republic of Naury unveiled a new livery

Nauru’s national airline has unveiled a fresh livery design inspired by the Republic’s flag, as it welcomed the first New Generation Boeing aircraft to its fleet.

The President of the Republic of Nauru, His Excellency Lionel Aingimea, debuted the new livery design in Townsville, revealing Nauru’s distinctive 12-pointed star representing its tribes and people, with the national colors extending along the aircraft’s body and to the wings.

President Aingimea said he was thrilled with the livery’s proudly Nauruan design.

The first flight will be a moment of celebration as it marks a new beginning as Nauru Airlines’ fresh branding takes to the sky on our new aircraft,” Dr. Keke said.

Dr. Keke said the entire fleet would soon be sporting Nauru’s colors and the national star.

“The waves flowing along the body of the aircraft are symbolic of the Pacific Ocean and reflect Nauru Airline’s historic and ongoing ability to connect the small island nations of the Pacific with Australia and beyond.”

“The 737-700 aircraft also expands the operational capabilities of our service, opening up opportunities to increase our network of destinations, which will be considered in the future.”

While headquartered in Nauru, Nauru Airline’s operations have been based in Brisbane for 20 years providing air services connecting Nauru and the Central Pacific with Australia.

These operations have continued despite the pandemic and Nauru Airline looks forward to extending services across the region.

Nauru is a tiny independent island country in Micronesia, northeast of Australia. It features a coral reef and white-sand beaches fringed with palms, including Anibare Bay on the east coast. Inland, tropical vegetation surrounds Buada Lagoon. The rocky outcrop of Command Ridge, the island’s highest point, has a rusty Japanese outpost from WWII. The underground freshwater lake of Moqua Well lies amid the limestone Moqua Caves. The capital of the Republic of Nauru is Yaren.

Following independence in 1968, Nauru joined the Commonwealth of Nations as a Special Member; it became a full member in 1999. The country was admitted to the Asian Development Bank in 1991 and the United Nations in 1999.

In February 2021, Nauru announced it would be formally withdrawing from the Pacific Islands Forum in a joint statement with Marshall Islands, Kiribati, and the Federated States of Micronesia after a dispute regarding Henry Puna’s election as the Forum’s secretary-general.